Collect and translate disaster information disseminated by official sources, render it into different languages and provide multilingual information to foreign disaster victims through the OFIX Facebook page and other means

We will set up a new inquiry line different from the Osaka Information Service for Foreign Residents (Consultation 06-6491-2297).

On Jan 11 2019 OFIX conducted a drill for its "Multilingual Disaster Support Center" together with Kinki Region Liaison Council of Local Associations for International Relations.

We conducted multilingual telephone counseling training. Participants provided multilingual consultations using a three-way call with interpreters (in English this time).
We also conducted a multilingual information dissemination drill. Volunteers learned how to prioritize information selected by OFIX, based on its importance to non-Japanese speakers affected by the disaster. They created a Japanese source text in Japanese based on their priority ranking, and translated it into multiple languages (English, Tagalog and Korean this time) and simple Japanese.

The media were on site covering the story on the day. Everyone worked with serious expressions in a vibrant atmosphere.

Osaka Prefecture has conducted an earthquale and tsunami disaster drill annually on January 17th, the date of the Great Hanshin-Awaji Earthquake. This year, we translated disaster information into multiple languages and posted them on Facebook for the scenario of the Nankai Trough Earthquake occurring at 9:30 am, the Osaka Prefectural Multilingual Disaster Support Center was set up by staff of the Prefectural International Affairs Division and OFIX.

Though we discovered a need to make more specific rules such as how to name a file based on the manual, we were able to apply our experience from previous drills to translate information into 14 languages in a short time.

We regularly conduct practice drills and prepare for effective operations in times of disaster.

This guidebook is written in nine languages (English, Chinese, Korean, Portuguese, Spanish, Vietnamese, Filipino, Thai and Japanese) and intended for foreign residents in Osaka. It summarizes what preparations you should make to prepare for an earthquake and what you should do in the event of an earthquake.

*Note: Regarding the section in the booklet "How to Confirm the Safety of Someone":

The usage of the "①NTT Disaster Emergency Message Dial (171)" was changed in May 2016. Please refer to the PDF below (in English/Japanese).

Osaka Prefectural Government's International Affairs Division has created a "Emergency Guide for Foreigners (Earthquake)" in multiple languages. This booklet is for foreign residents, and may also be used as a model for municipalities to use when developing their own emergency guides. You can download it below:

NTT's Disaster Emergency Message Dial (171) service allows you to record and play back voice messages using a telephone (fixed land-line, payphone) to confirm the safety of yourself and others after a large-scale disaster.

The following instructions on Disaster Emergency Message Dial (171) are effective as of May 2016. Since it is subject to change, please check the NTT West/NTT East websites for the latest information. 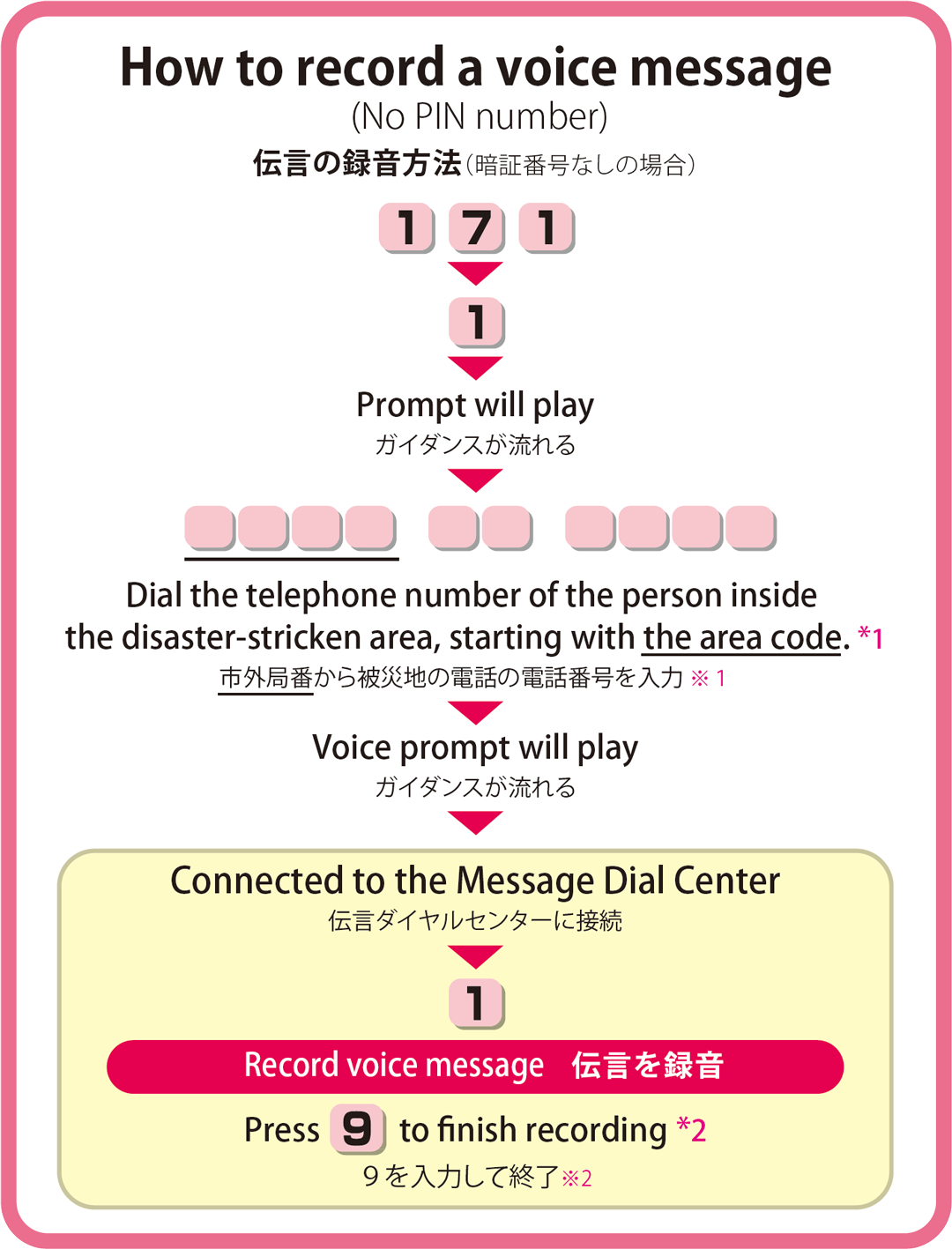 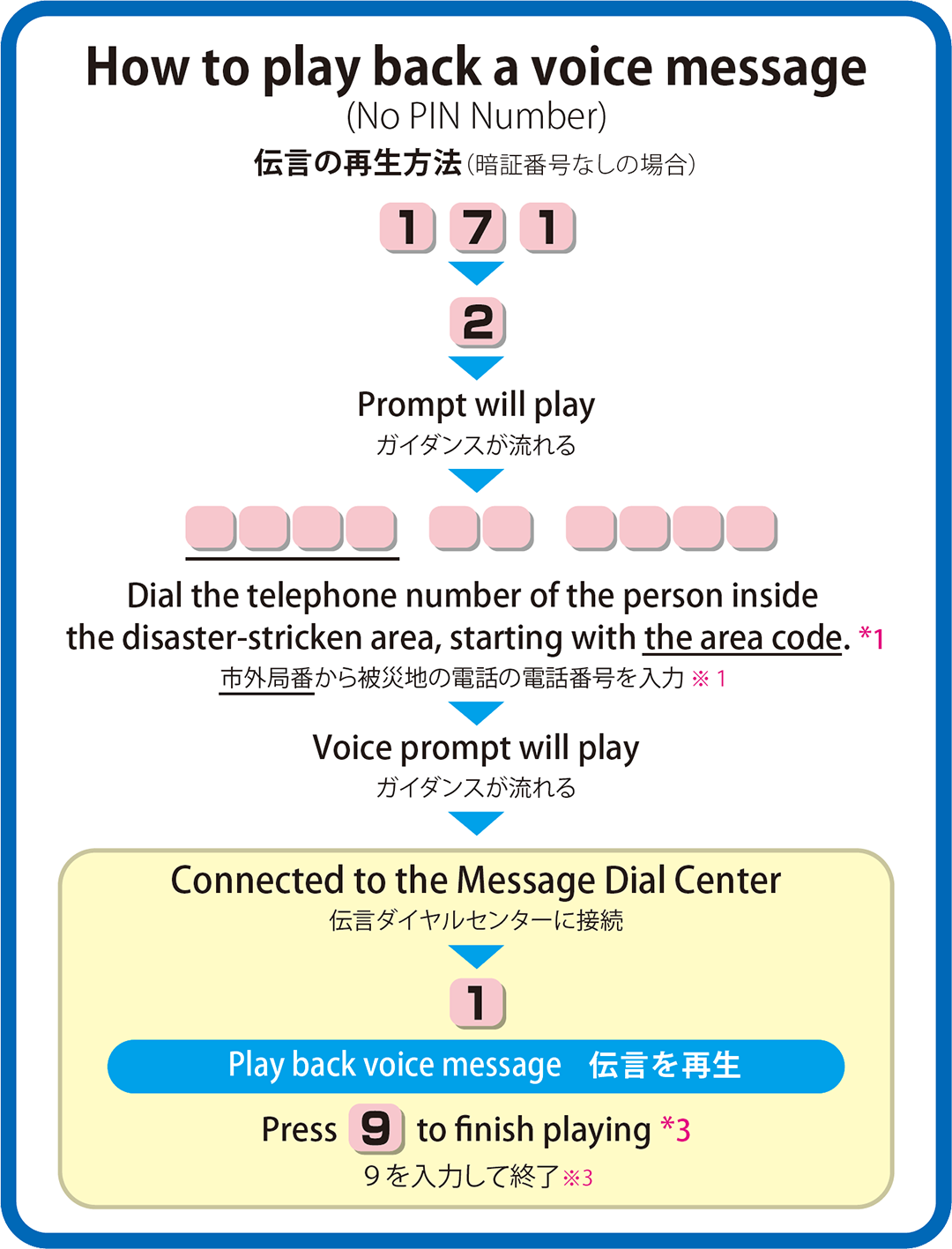 You can find past articles, posted on Facebook after the Northern Osaka Earthquake on June 18, using the link below.

Osaka Gas "How to reset a gas meter"

Be aware of Landslides

Information from local governments and International Associations in Osaka Prefecture

Multicultural Information of the surrounding area of epicenter